As well as having many traders for you to enjoy, we also have a selection of outstanding large scale model railway layouts from around the UK, in a wide variety of scales and showing railways from different periods and countries.

The NWAG’s exhibition layout is a new one and is still in the final stages of completion having been delayed over the last 18 months, like a lot of things, by the COVID pandemic. The track gauge is 45mm, the scale is 1:22.5 and consists of a double track oval with a third loop through the station. There are additional storage loops at the back of the layout to aid variety when running the layout. Control is DCC and our aim is to always have at least one train on the go when attending exhibitions.

Sadly the layout wasn’t  finished it time for this year Festival so will be appearing next year.

The G Scale Publicity layout is used to demonstrate what can be achieved in a relatively small area for such a large (1-22.5) scale. We run a variety of trains from different railways across Europe, they are either track powered using digital control or are onboard battery powered and radio controlled.

Please feel free to ask questions about G Scale and about how to join the G Scale Society.

The Glyn Valley Tramway was a narrow gauge railway that ran through the Ceiriog Valley in north-east Wales, connecting Chirk with Glyn Ceiriog in Denbighshire. The gauge of the line was 2 ft 4+1⁄2 in. The total length of the line was 8+1⁄4 miles, 6+1⁄2 miles of which were worked by passenger trains, the remainder serving a large granite quarry and several minor slate quarries. The trust will be bringing their 16mm exhibition layout for us to enjoy.

Most of the freight that used the line was fish from the quayside. After the closure of the line many years ago, a group of local rail enthusiasts reinstalled the tracks ; buildings ; purchased a few foreign engines stock. Most week-ends trains can be seen running. The buildings are from BR days. This international flair works well. Most of thetrees are supplied by Ceynix Trees. Buildings are supplied by T & M models.

A classic dual gauge 16mm layout. Pentre both 32mm and 45mm represents a preserved Welsh narrow gauge railway with a developing museum. Traditional hand laid track has been used, with real ballast. The Museum complex has been extended with extra buildings and a display of historic 16mm locomotives and rolling stock.

Pentre represents a preserved narrow gauge railway in 16mm to the foot scale. The dual gauge circuit (32mm and 45mm) is hand-built using traditional Bassett-Lowkeand Bonds gauge ‘O’ rail and wood sleepers. There is a modest through station, a small loco depot and at ‘Pentredwr’a railway museum has been established. Live steam locomotives, fired by gas, and even coal are a special feature, as is an interesting display of scratch-built rolling stock. The friendly operators will be happy to talk about the models and the railway.

Association of 16mm Narrow Gauge Modellers Ltd (4.500 members worldwide), there are a significant number who concentrate on the heritage side of the models, as well as the early members. Eleven years ago, Derek suggested that they have a layout at the National Show exclusively devoted to running those models, locos and rolling stock, together with a static display on which to showcase them. Thus the layout was built & it is called Phurcombe Hall, in memory of the founder of the Association, one Graham Lamb, whose garden line was the PH and Stonehenge Tramway. Therefore they have built the layout to look like the early exhibition ones, not concentrating on scenery. All the buildings etc. also have heritage significance – indeed some are from Graham’s original line. The purpose is to focus on the running of the models.

Rowlands Modules – Setting the Standard. During 2013 Gareth Jones, one of our members, led an initiative to develop the standard published below for the building of ‘modules’ that can be brought together to form layouts either by an individual or by groups of people wanting to create something different every time they meet at an exhibition or event. The modular layout has appeared at the National Garden Railway Shows at Peterborough Arena from 2014 onwards.

16mm / foot is a scale often used to model narrow gauge prototypes in the garden. This compact circuit of Mamod track disguised by a complex of colliery buildings and structures provides an opportunity to get a closer view of locomotives and rolling stock normally viewed out of doors at a distance. Using battery powered radio-controlled motive power, it is possible to represent the type of shunting operations which used to be carried out at pitheads in many parts of the country. With a small circuit included in the track plan, live steam locomotives can be used for variety and interest. Although built to the same gauge, the high-level tracks serving the mine shaft are much lighter weight. Because of this, and the tight clearances typical of this type of system; only the smallest locomotives and rolling stock operate in this area.

Shunting is an acquired taste in 16mm, and I am not a particularly fervent advocate of this type of operation, in the garden at least. However with three Slomo-fitted locos in my possession, the need for a slow-running layout became apparent, so Kingsdown Roads was born. Messrs Grainge and Hodder came up with some flat-packed lightweight baseboard and turntable units, which were ideal for the job. They consist of plywood sides and tops with bracing underneath, and locating dowels at each end. For compactness and ease of operation the turntables are at right angles to the main boards.

The trackwork is Mamod, mainly because it allows sharp curves and I had a fair bit of it already. Most of the points needed their operating handles trimmed to avoid fouling the locos. The ballast is from Swift Sixteen.

The layout’s numerous buildings are provided by Pendle Valley Workshop. The scene represents a small fictional goods yard and engine shed part-way along a country branch line. A model shop and a two-storey cottage suggest there is a village in the vicinity.

Almost all the figures are from Motley Miniatures, and the goods are a mixture of 3D printed packages and wooden kits from various small suppliers. The walls and paving stones are made using DIY filler in Jigstones moulds.

Operation is a mixture of fiddly shunting and through traffic, the latter requiring some manoeuvring when proceeding in an easterly direction (viewed from the front). The numerous switching and track options, not to mention two turntables to rotate and line up, require some concentration by the operators. But don’t let that put you off talking to them – they are quite capable of making mistakes with or without an audience. 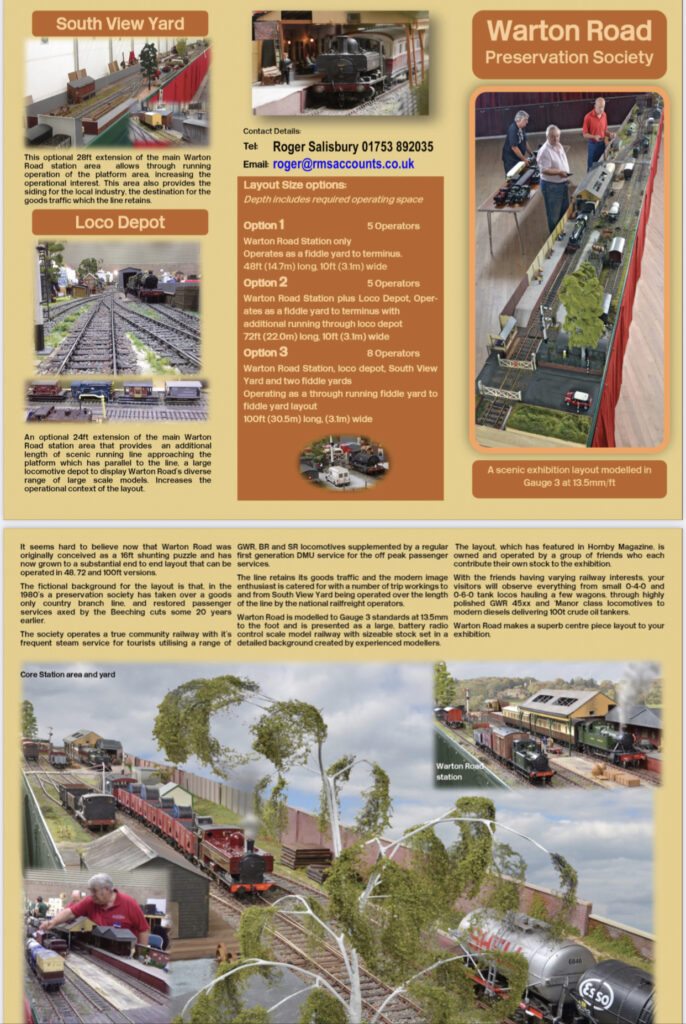